Dan Klyn’s focus in teaching and in practice has been to apply lessons from close study of architects and architecture in the built environment to the architecture and design of places made of information.

Dan is currently writing a biography on Richard Saul Wurman, American author (90 books), graphic designer and the creator of the TED conference series.

“And while there’s nothing to see here, or anywhere else in Wurman’s oeuvre, about testing a prototype or dummy with end-users,* I think information architects and UX folks can take some helpful cues from RSW’s obsessive focus on connecting well with stakeholders through an artifact that “talks” even while being dumb. Getting gatekeepers to interact with a prototype themselves, to enable an experience with the heft, and dimensions, and tangibility of a nascent idea that’s not proxied through observation of another’s use.”

*RSW does not believe in testing products with end users. Ever. Once, in what I’m certain was an unconscious parallel to Salvador Dali’s famous response after having been asked about using drugs, Richard said to me “I am the mall intercept.”

In this 1-hour webinar, Dan will discuss:

Vivid Resources hosts Vivid Voices first Micro-Talk with Modern Accelerator where they discuss redesigning design teams in the age of the acceleration of everything. 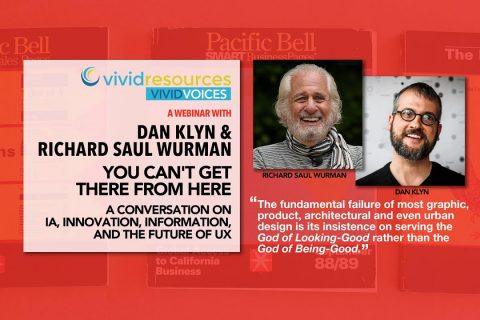 As far as Richard Saul Wurman is concerned, the next modality for interacting with and understanding information is one that we can't get to from here.

Cool Stuff in your Inbox
Coming this month…
Introducing our Vivid Voices: Micro Talk series, featuring short discussions with design experts from around the country. Subscribe now and be the first to know when we post new videos.
Resources
Copyright Vivid Resources - All Rights Reserved
Web design by RiverVisions